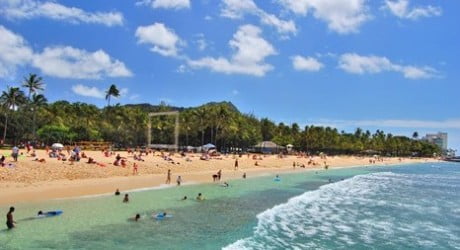 The main urban beach of Honolulu is Waikiki. As the birthplace of surfing, you should expect waves and occasional rough seas. The two-mile beach is lined with hotels and some parts are closed off for the exclusive use of surfers.

The gay part of the beach is aptly called Queen’s Surf beach. The name originates from Hawaiian Queen Liliuokalani who owned property here and is not a comment on its bathers. It’s a rather secluded section that stretches from the Waikiki Aquarium to a pier called Kapahulu Groin that separates it from Kuhio Beach.

Only body-boarding is allowed at Queen’s Surf Beach. There is good snorkelling in front of the Aquarium where there is a small reef.

To get to Queen's Beach drive up Kalakaua avenue to Kapiolani Park or ask a taxi driver to take you to the Waikiki Aquarium.The gay beach is located between the pier and the Aquarium. Last updated: 03-13-2014

Reviews from other users