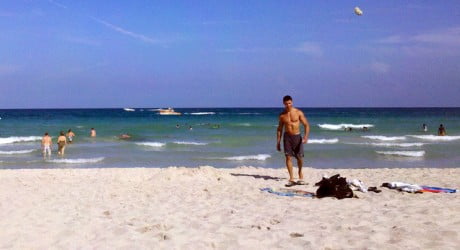 The south part of Miami beach (shortened to SoBe) started attracting gay sunbather in the late 1980s. There is a lot of speculation about the reasons. Some people say it was the popularity of the Golden Girls among the gay community. Others, attracted by stereotypes, say that that the pastel hues of the Art Deco buildings and the variety of its antique stores reach deep into the gay sensitivities.

But many point out that gay guys naturally converge to the end of a beach away from the crowds. The truth is probably a mixture of all three.

Whatever the reason, South Beach has become an international gay destination offering sea, sun, sex and parties in whatever order you prefer.

The Winter Party in March draws tens of thousands of ripped bods and the White Party in November is the longest-running gay circuit party anywhere in the world.

Still, the biggest appeal of South Beach lies in its combination of frenetic nightlife and quiet chilling out in the small network of backstreets. It’s easy to take a step out of the frenzied partying and relax to the max.

A taxi from Miami airport to South Beach is a flat fee at around $32. The gay beach is easy to find as it is demarcated by rainbow flags. If you are elsewhere in Miami you can hop on the South Beach Local bus which runs avery 15 mins and has several stops around South Beach. Last updated: 03-13-2014