« Back to Los Angeles 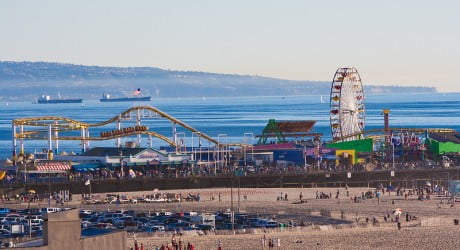 Many gay travellers who want to stay near the beach in Los Angeles opt for Santa Monica. Gay West Hollywood is twenty minutes by car up the picturesque Santa Monica Boulevard, while Venice beach and its muscle Marys are twenty minutes’ walk down the coast.

Santa Monica is where many gay Angelenos eat and party. The area is really mixed and lifestyles so integrated that you won’t see rainbow flags.

The historic Santa Monica pier is the big attraction, offering everything from food stalls and fun rides to an aquarium, a trapeze school, live music, an amusement arcade plus the odd yoga and tai-chi classes. This is California, after all.

At the top of Santa Monica there is a gay-popular section in the segment called Will Rogers State Beach (or in gay parlance Ginger Rogers Beach) opposite Patrick’s Roadhouse restaurant. This is where college guys, West Hollywood residents and tourists sunbathe and cruise discreetly, especially at weekends.

Santa Monica is the northernmost of the string of Los Angeles beaches. It lies at the intersection of two major highways: California state route 1 or the Pacific Coast Highway that runs north-south of the coast of California and the start of the Interstate 10 which runs east from Santa Monica to San Bernardino and Blythe.It is also the beginning of the Santa Monica Boulevard that connects West Hollywood to the coast.Buses 4 or 404 run down the Boulevard every 15 minutes. It takes around one hour to get there from San Vincente, the closest stop to West Hollywood. Last updated: 03-13-2014