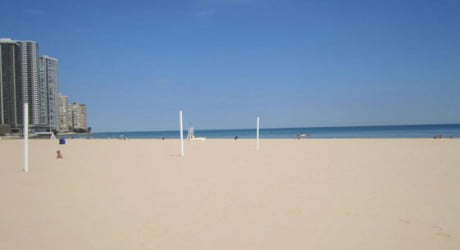 It is apt that the gay beach in Chicago, popularly called Hollywood Beach, is officially named after Kathy Osterman, the Chicago politician who fought for gay rights in the 1980s. It is arguably one of the best kept secrets in gay travel.

The beach is full of pure white sand that, on a sunny Midwest day, makes you believe that you are in Florida rather than Illinois. You’ll also find a friendly, down-to-earth crowd with a lot less attitude than other US beaches on the south coast.

Note that smoking is not permitted on any Chicago beach. On the upside, there is free wi-fi offered by the city council.

There is no car park by the beach so it is best reached by public transport You can take the 147 (Outer Drive Express), 84 (Peterson) or 151 (Sheridan) buses and get off at Ardmore. From there, walk towards the lake. If you come by train, take the red line, get off at Bryn Mawr (six stops north of Belmont at Boystown) and again walk under Lakeshore Drive towards St Andrews church and the lake.Once you reach the beach, head to the southern part close to the pier which is exclusively gay. Last updated: 03-13-2014