« Back to Cape Town 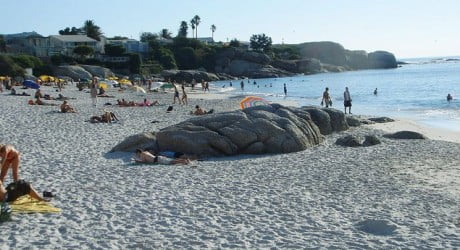 Clifton is the main beach suburb south of Cape Town basking in the shadow of Lion’s Head. it’s often called the Riviera of South Africa.

It comprises four stretches of fine white sand numbered Clifton One to Clifton Four. Clifton beach One is for reserved for water and beach sports and attracts some gay men who want to gawp at the muscular athletes. Clifton Two is for families and groups of young people, so you may end up there if you know straight locals.

Clifton Three the main gay beach and is one of the two pillars of the gay scene in Cape Town (the other being Green Point). Clifton Four is not gay as such, but it’s very glamorous with large yachts anchoring in the entrance, so you may want to give it a try.

What makes Clifton unique is the natural cleaning of the beaches during the year. The ocean tides and currents swallow the sand in winter and re-deposit clean sand in the spring. By summer (December in Cape Town) the beach looks as pristine as on a desert island.  The water, mind you, is cold even in the summer, so beware.

The Golden Arrow buses provide public transport between Cape Town Centre and Hout Bay that pass by the Clifton beaches. You can also walk south from Green Point or, better, take a taxi. Ask to be dropped at Clifton 3 and follow the walkway down. Last updated: 03-26-2014

Reviews from other users